Why I Give Back: Neeta Basantkumar ’04

When Neeta Basantkumar immigrated to the United States from India with her family at age 19, Widener University was not on her radar. In fact, it was her dad, a part-time university employee, who took her transcripts to Widener while she was taking classes at Delaware County Community College.

Today, Widener holds an unshakable place in Basantkumar’s heart, and she’ll take every chance she gets to share with others just how transformative her time on campus was and to give back to current students.

I’m very proud of where I went to school and to be a part of the Pride." —Neeta Basantkumar '04

A Fire Was Lit

As an electrical engineering major, Basantkumar was quite set in her career path until her advisor, Dr. Yun Gong, signed her up for the Research Experiences for Undergraduates (REU) program through the National Science Foundation. It was during her REU internship that Basantkumar found something new, and smaller, that lit a fire in her.

“I thought I wanted to change the world with transformers and transmission lines, but in the REU program my passion changed to microelectronics,” she said.

“I had no idea the REU program even existed, but because Dr. Gong advocated for me, the trajectory of my life shifted.”

On campus, Basantkumar became the secretary of Widener’s chapter of the Institute of Electrical and Electronics Engineers (IEEE) professional society and began giving back by volunteering at the annual engineering girls camp. Despite the fact that she had to work multiple jobs to support her education and couldn’t get as involved on campus as she would have liked, Basantkumar says Widener welcomed her from day one and she never felt like an outsider.

“As an immigrant I had to work, but Widener also gave me the support and scholarships to make it work,” she said.

These days, Basantkumar is living out her microelectronics dreams as a process engineering manager for Northrop Grumman’s advanced technology lab. She’s also passionate about paying forward the gifts she received as a student. Her support of the Widener Fund ensures that the university is equipped to respond to the unique needs of students as they arise, from financial aid and academic support to athletics and other campuswide activities.

Basantkumar also recently took the initiative to connect the hiring manager at Northrop Grumman with Widener’s Career Design and Development Office to develop a co-op and internship program for engineering students. The partnership should be finalized this summer.

“My career really started at Widener with my internship, and I hope with this partnership I can help start careers for many other students,” she said. “Building more relationships and community is important to me, and because I’m local enough to Widener, I knew I wanted to give back through that mentorship.”

Basantkumar’s father passed away a year after she graduated, but a Widener Dad pillow proudly sits in her office adorned with a message: Thanks dad for giving me the confidence to reach for the stars.

“My dad got me to Widener, and that’s where I really found the strength to come up in my life and start to attain my dreams,” she said.

With alums like Basantkumar dedicated to giving back the lifechanging opportunities they got at Widener, many more such dreams are sure to come true. 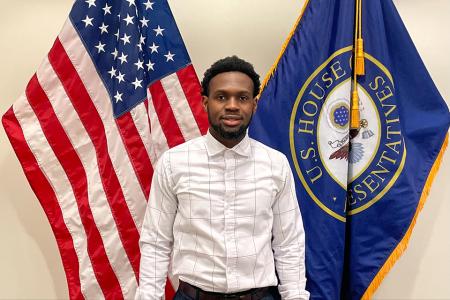